The gender pay gap is like that black mould in the bathroom that you just can’t seem to get rid of - insidious, stubborn and frankly embarrassing, at least when you have your cultured Scandinavian friends over to visit.

That’s pretty grim. The retirement age is sure to rise, but even so by 2069 the entire current UK workforce can expect to have hung up their boots before men and women are paid equally.

To tackle a problem it’s essential to understand it, of course, which is why statements like that need to be qualified. The implication of ‘the gender pay gap’ is that women get paid less than men for the same work, but it is in fact illegal for employers to do that.

Somewhat unsurprisingly as a result, there is scarce data showing flagrant discrimination against women along those lines.

Discrimination undoubtedly still exists, of course, but it tends to manifest in subtler and arguably more insidious ways, such as promotion bias against working mothers. But even then it’s not accurate to ascribe the entirety of the 19.2% difference in men’s and women’s median hourly pay to discrimination of any form.

Some of it surely also comes down to societal trends, such as the higher propensity of men to work in high-paid tech fields, which correspondingly produces a more macho culture there, creating a vicious, man-cavey cycle.

So there are many causes, we’re all agreed... but which is the most important? Where should we focus our efforts?

Producing concrete or conclusive statistics on the gender pay gap is very tricky, given the nature of the data. But there are some interesting observations that can be made from what’s around. With that in mind, here are three charts illustrating the impact of some of the causes behind it.

The problem of part-time 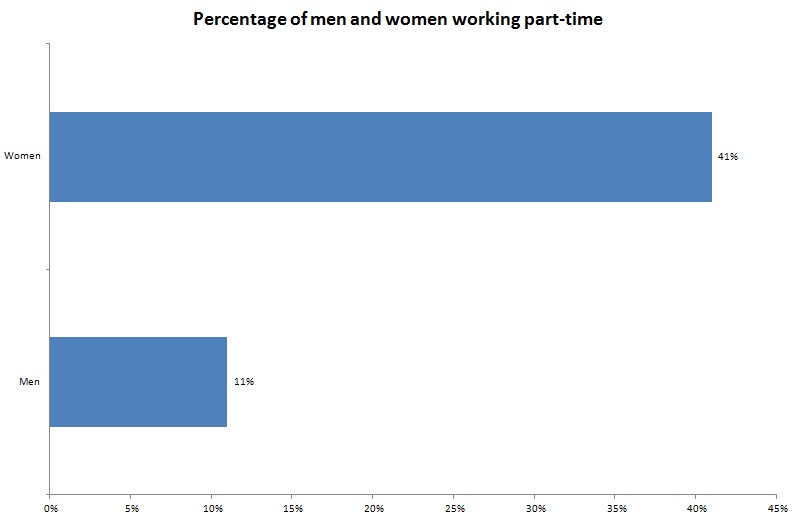 MT will be the first to tell you that part-time work does not have to be a career cul-de-sac. Many highly successful people work fewer than 30 hours a week, including our own features editor. However, the fact remains that the part-time median hourly salary is nearly 60% lower than the full-time median.

In the future, this may or may not have less bearing on the gender pay gap, but at present it does. Women are nearly four times more likely to be in part time work than men, largely because they are much more likely currently to put time into childcare and the care of elderly or dependent relatives.

The difference it makes? If you exclude part-time work from the statistics, the gender pay gap drops from 19.2% to 9.4%. Indeed, when only looking at part-time workers, women actually earn more per hour than men.

The problem of sector 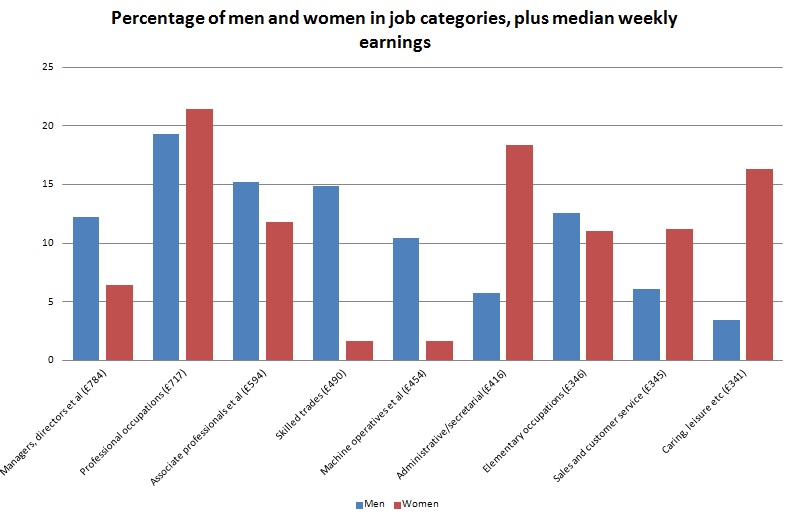 Men are much more likely to work in higher-paid job types. Source: ONS

Another contributor to the gender pay gap is the differing profile of job types for men and women. Put simply, men are more likely to work in roles that pay better, such as higher managerial or skilled trades, rather than those that don’t, such as administrative or care.

The reasons are no doubt complex – young women being put off lucrative STEM careers because of cultural stereotypes or their history of male domination; a lack of opportunities for females in skilled trades; a bias against promoting women to senior roles – but the effect is significant.

If you look at the proportion of men and women who work in each job category and then the median weekly earnings for those categories, you can work out the average median value for both sexes (hardly gospel, but in the absence of a publicly available mean, still informative).

The problem of age 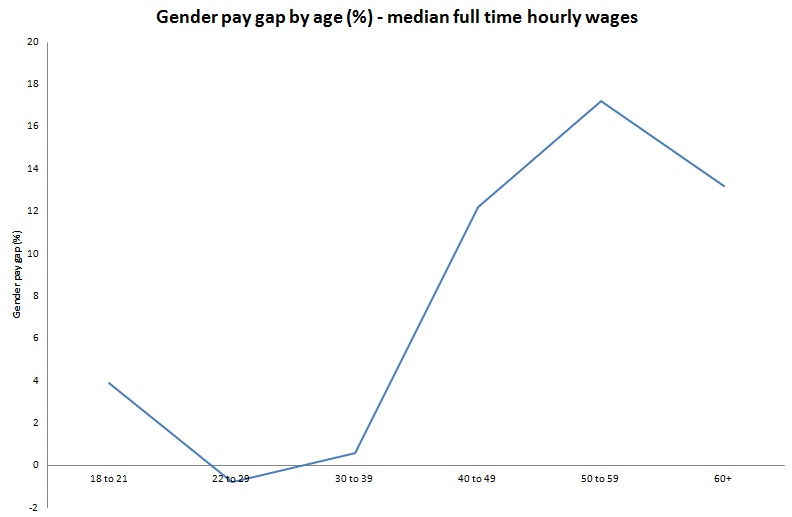 Women actually get paid more than men in their 20s, but it's all downhill from there. Source: ONS

The average twenty-something woman in full-time work earns a fraction more than her male counterparts. In her thirties that will be reversed slightly. In her 40s, it’s 12.2% a chasm in favour of the men, and from there it only gets worse.

The reason is simple: progression. You only have to look at the CEOs of FTSE 100 companies to see that men are more likely to end up in more senior positions. The reasons for that are more complex, but it’s likely that discrimination against working mothers for both promotion and recruitment plays a central part – doubly so if those women go part-time for a while.

What all this means if that our focus should perhaps be less on finding dinosaurs who actively discriminate against women, and concentrating on opening up sectors in STEM and other areas from which women have traditionally been deterred, and challenging the bias against working mothers (full-time and part-time) through policies such as shared parental leave.

Absolute parity may never be reached, because ultimately men and women have to be free to make their own choices around things like how much time they take off upon having a child or which subject they want to study at university. You can’t force it. But it will certainly be less embarrassing if the gap doesn’t close from where it is now.

Sign up to MT's new Inspiring Women in Business bulletin for all the top insights and advice from Britain's most successful women.

If you want the chance to hear from superstars like TalkTalk CEO Dido Harding or Studio 104's Jane Porter in person, why not book a ticket to MT's Inspiring Women In Business event on 16 November?

By Éilis Cronin
1 hour ago
Women in Business

By Éilis Cronin
27 hours ago