The UK has been undergoing something of a self-employment boom in recent years, with the proportion of the workforce going it alone rising from 13% before the recession to as high as 15%. That has provoked much muttering and grumbling from those who think it’s down to people forced into working for themselves by the financial crisis.

But now the Bank of England has concluded that the rise in self-employment is largely due to much deeper structural changes, including an ageing workforce, more women working for themselves and technology, and so is not necessarily the bogeyman trade unions and various think tanks have been working themselves up over. 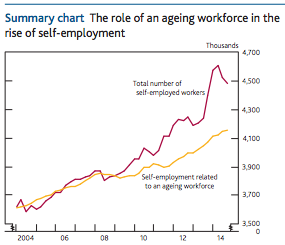 The UK’s ageing population accounts for half of the rise in self-employment since 2004, according to a report by Bank analyst Srdan Tatomir. Last year, the Office for National Statistics said the number of self-employed over-65s had more than doubled to nearly 500,000 in the last five years. ‘This is perhaps because they have accumulated more knowledge or experience to start businesses,’ the Bank’s report mused. ‘Or it could be because they prefer the greater flexibility that self-employment offers.’

A less happy possible reason is that workers are putting off retirement to save more. A Saga survey in 2014 found a third of older workers didn’t feel confident enough to retire – not exactly surprising in an era of seemingly eternally low interest rates. But then again, given their protected pensions and overly-generous political giveaways like the ‘granny bonds’, young workers could fairly argue that the older generation should jolly well suck it up and work longer if they feel they have to.

Women have also been working for themselves in increasing numbers, perhaps the result of more mothers seeing it as a good way to balance work and family. Just a third of self-employed workers are women, according to the ONS, but that has increased 34% to 1.4 million since 2009, compared to a rise of just 15% amongst men.

And behind all of this demographic change is technology, Tatomir said, citing the rise of e-commerce and platforms like eBay, Airbnb and Uber. That doesn’t quite stick with the ONS’ stats, which put construction, taxi driving and carpentry as the top self-employed roles (although Uber may be helping along any rise in taxi drivers). But you can’t argue with the fact that it’s easier than ever to found a business from your kitchen table, with everything from accounting to supply chain freely available over the world wide web.

Those worried about the rise in self-employment can point to the fact average median income has fallen 22% to £207 a week since 2008/9. But people working for themselves don’t exactly seem in a hurry to find other jobs – those looking for more or new work only accounted for 9% of the total increase in self-employment. And only 4% of self-employed workers were interested in getting a new job at the end of 2014, which was actually lower than regular employees. Britain may not have an army of entrepreneurs like the US just yet, but it looks like we’re certainly becoming more self-sufficient.