In case you hadn’t heard, vlogging (video blogging) is definitely A Big Thing among young people. YouTubers such as Zoella (aka Zoe Suggs) and her boyfriend Alfie Deyes have millions of devoted subscribers and social media followers – and, increasingly, lucrative product placement deals too. But a new report shows vloggers may not be the golden geese brands had hoped.

On the other hand, more than 40% had discovered new brands through stories on newspaper or magazine sites or from a friend’s recommendation, according to the survey of almost 42,000 people in 32 countries. 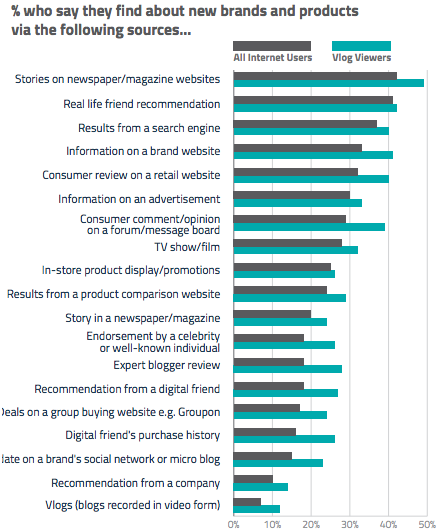 And when people are actively searching for products, vlogs rank even lower: 5% of internet users and less than 10% of vlog watchers use them for research, turning to, surprise surprise, search engines and review sites instead. 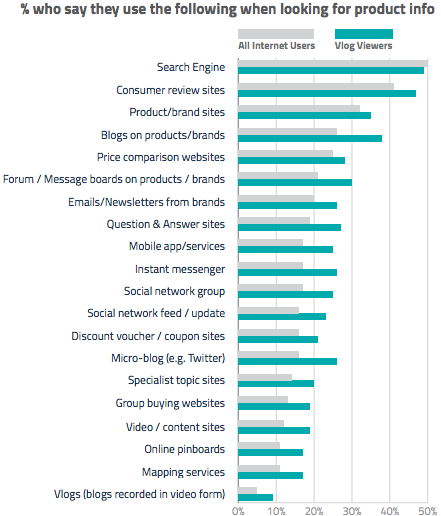 ‘It’s clear that vlogging is still heavily associated with entertainment, comedy and advice – rather than a space for overtly commercial activities,’ GWI’s head of trends Jason Mander said. ‘Incorporating the latter in a way that seems acceptable to the vlogging audience will be crucial.’

On the other hand, the survey doesn’t take into account the more subtle effects of product placement. Someone may have read about that mascara already, but a vlogger’s recommendation could give them the nudge they need to go out and buy it. And the youngest people in the study were 16 – it could be that vloggers’ army of tween and young teen fans are far more susceptible to their brand recommendations.

But vloggers are known and loved for their authenticity – just them, a camera and their fans. So any product placement would have to be done in a way that doesn’t destroy that – for example, a beauty blogger recommending a lipstick they actually really liked already.

And the Advertising Standards Authority warned vloggers in November they had to signpost promotions, after food giant Mondelez paid some to talk up Oreos. So they’ll have to figure out how to stay genuine while making clear they’re making money. Although if they don’t show brands the money, they won’t be making any anyway.