Creative destruction is the lifeblood of capitalism, but as humans we have an in-built tendency to focus more on the losses caused by destruction than on the gains that arise from creation.

So the decline of manufacturing in the UK has been well-documented - in 2008, PwC's Destination 2030 report carefully laid out three scenarios for the UK economy, and in all three, the authors could see no other future than that manufacturing would continue its sorry, long-run relative decline.

Eight years on, PwC's chief economist John Hawksworth sees no evidence to doubt this prognosis. 'Fifty years ago, only half the UK workforce was in services, a third were in manufacturing and the rest were in sectors such as energy, water, construction and coal mining. Now it's 80% in services and less than 10% in manufacturing. That's a dramatic shift from manufacturing to service.'

Furthermore, he reckons that the future of the UK economy will be more about how jobs are distributed within the growing services sector. And the outlook according to PwC's latest figures (see chart below) is surprisingly positive, with a net gain in employment by 2025 of over 1.5 million jobs. 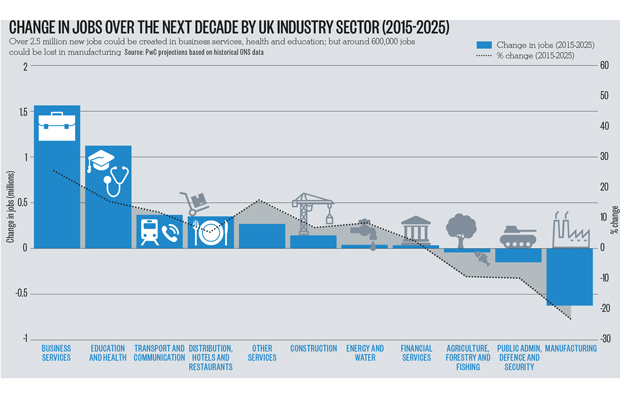 Here are some predictions of how five major sectors in the UK economy will change over the coming decades.

The City is, perhaps, Britain's greatest competitive advantage. But financial technology - FinTech - is reshaping the way established financial institutions think about building, running and leading their businesses. FinTech is creating new financial products and services enabled by the use of technology - from online lending platforms that allow individuals and businesses to lend and borrow between each other, to robo-financial advisers - but also blurring the lines between traditional and non-traditional financial services companies, whether that means Apple or Atom.

PwC's 2016 FinTech survey highlights the emergence of digital-first, mobile-only banks; the potential of blockchain, the technology underpinning the bitcoin digital currency, to enable the sharing of data between businesses that have different or competing objectives; and the rise of 'InsurTech' - new sharing models (car or otherwise) will generate insurance solutions, while remote devices, wearables and genomics will drive improvements in risk and loss assessments.

According to Universities UK, the sector's umbrella body, higher education already brings in an estimated £10.7bn of earnings for Britain, and more than three-quarters of higher education institutions also provide qualifications overseas. But the days of traditional teaching are over. From the collection of big data to the development of massive open online courses (MOOCs), higher education is morphing into a more automated world of self-directed learning.

Devices will replace faculty by 2030. Well, that's the bold prediction of Stephen Joel Trachtenberg, a professor at George Washington University. There will be many more e-learning options from numerous providers on multiple platforms, including augmented reality devices such as Google Glass and Oculus. The traditional three-term or two-semester pattern will be replaced by year-round learning, while in many employers' eyes certificates from schools, workplaces and industry may gain in respectability.

The universities least vulnerable to online competitors are likely to be the Oxbridge and Russell Group institutions with established reputations and low student-to-tutor ratios - they provide great networking as well as a degree. But others may need to focus their investments on education technologies.

The Deloitte Consumer Review: Digital Predictions 2016 attempts to identify the biggest tech disruptors as far as retail is concerned. Cognitive technologies, such as natural language processing and speech recognition, could radically change how businesses and consumers interact by enhancing the emotional connection between consumers and brands. Meanwhile, virtual reality will provide opportunities to businesses looking to create more immersive experiences.

The growing adoption of ultrafast gigabit broadband - it predicts around 600 million people around the world will have a gigabit connection by 2020 - will support innovations like VR and the 'internet of things', increasing the use of targeted TV adverts, and improving the performance of mobile apps even more. The growth of image-sharing apps could help companies turn the social media environment into a transactional one, as networking sites begin to encourage punters to hit the 'buy' button not just the 'like' one. 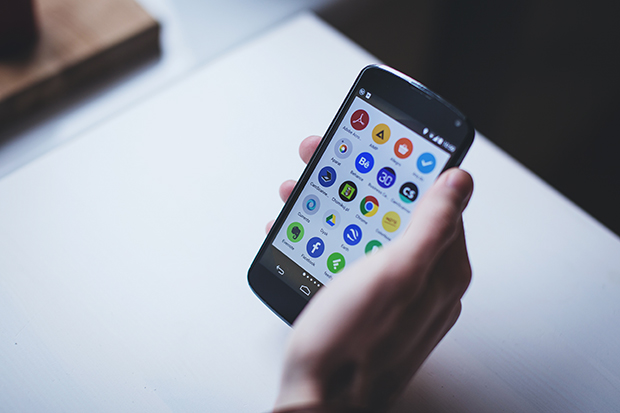 The digital transformation is already well under way here. Traditional manufacturing is in the throes of a huge upheaval, accelerated by exponentially growing technologies from intelligent robots and 'cobots' (the name given to collaborative machines) to autonomous drones, sensors and 3D printing. Within the sector, it is being referred to as 'Industry 4.0' - the fourth industrial revolution.

A study from McKinsey, Industry 4.0, predicts that the future of the manufacturing sector will be driven by four technological disruptions: the rise in data volumes, computational power, and connectivity, especially new low-power wide-area networks; the emergence of analytics and business-intelligence capabilities; new forms of human-machine interaction such as touch interfaces and augmented-reality systems; and improvements in transferring digital instructions to the physical world, such as advanced robotics and 3D printing. McKinsey estimates that consequently some 40-50% of equipment in factories will have to be replaced over the next decade. The new technologies are likely to create new business models for manufacturers too, from pay-by-use and subscription-based services (something Rolls-Royce has pioneered in its jet-engine business) to licensing or monetising the value in their expertise or data.

The better use of technology has the potential to transform the quality and increase the efficiency of the healthcare sector by 'activating' patients to take more control over their wellbeing. A Deloitte report predicts reduced travelling and waiting times as doctor interactions become increasingly virtual and care is delivered in the home. Paper prescriptions and pharmacy visits could be replaced by home delivery. Drugs, delivery devices and packaging will interact with wearables and mobile health (mHealth) applications to track adherence, manage dosage and replenish stock. Likewise, wearables and smart-pill devices will track patients' real-time physiological response to drugs. Blockchain tech could be used to enable patients to access their health records - something already being piloted in Estonia. And the further development of drones could enable the delivery of specialised medicines in places that have poor infrastructure. It promises to be a white-knuckle ride - albeit a very healthy one.

How to minimise the fallout from creative destruction

Old industries die and new ones take their place, but how best to manage the transition? PwC chief economist John Hawksworth says future government policy must step up in three key areas:

1. Skills – Lifelong learning for the retraining of more people, more often. The traditional model of education, delivered only at institutions, over a specific period of time, looks increasingly out of step with tomorrow’s world.

2. Housing and infrastructure – Action must be taken to reduce blockages to labour mobility around the country, increasing housing supply in London and the south east, and relieving pressure on transport systems to ensure people can get to work where demand is highest.

3. Income and equality – We are seeing a hollowing out of the job market, with middle-tier management roles disappearing as a result of technological change and competitive pressures. There is a real danger that we create a bigger divide between the rich and poor. The minimum wage, apprenticeships and training are a start to addressing some of these issues – but it will require a long-term strategy.