John Lewis, that most beloved of British retailers, is going boldly where Tesco went and failed before: opening restaurants and cafés in its stores.

The department store is opening 10 Joe & the Juice and Rossopomodoro outlets around the country. It trialled the former, a hipster Denmark-based café, in Solihull. The latter, an Italian with 70 restaurants in Italy and six in London, was tested in its flagship Oxford Street shop, where both have also opened pop-ups in its rooftop ‘Summer Retreat’.

Newcastle will get both chains; Joe & the Juices will open in Bluewater, Watford and the new Birmingham store; while Kingston will get a Rossopomodoro. Five other openings are yet to be announced. Many John Lewis stores have their own coffee shops and/or restaurants already, but these are the first outside chains.

‘Customers have welcomed the introduction of new and exciting places for them to refresh and refuel, and continuing our partnership with [Joe & the Juice and Rossopomodoro] will allow us to offer another compelling reason for customers to shop with us,’ said Alison Smith, John Lewis’ head of food service.

It all sounds rather familiar. Tesco had almost exactly the same idea under Philip Clarke, as it tried to stem the customer exodus from superstores by turning them into ‘destinations’ with Giraffe restauarants, Harris & Hoole coffee shops and Euophorium bakeries. 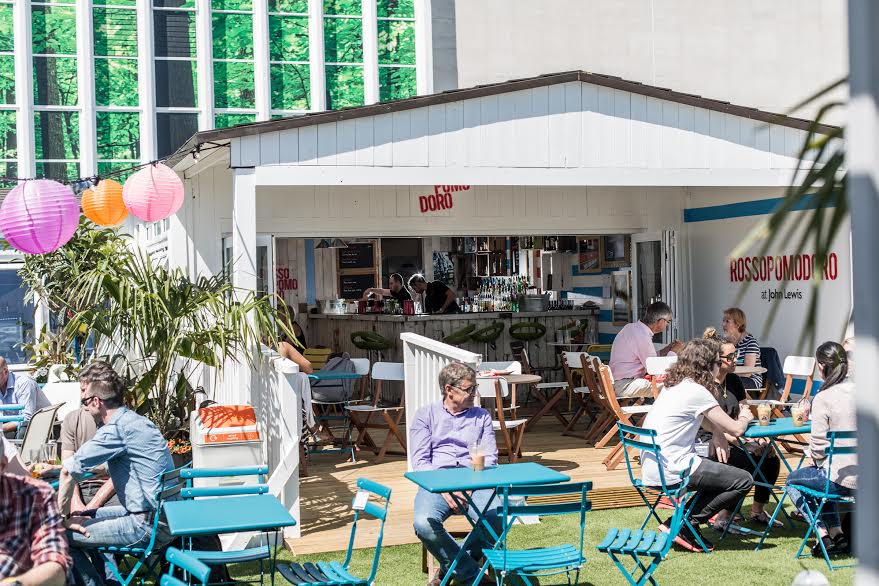 That didn’t exactly turn out well, but Tesco hadn’t realised shoppers were leaving for lower prices at Aldi and Lidl rather than for lack of posh coffee. John Lewis, on the other hand, is doing rather better, with sales and profits growing healthily. Its middle-class customers are also more likely to splash out on a meal or snack while they look at new TVs than people on their weekly food shop (which is becoming a thing of the past anyway).

But it does reflect an issue for all high street retailers that have huge stores with long, expensive leases. With the rise of online shopping and click-and-collect, both areas where John Lewis has been very successful so far, shops are turning into showrooms and pick-up-points, as much as places where people browse and buy. That means a lot of space is increasingly underutilised.

It’s a risk to try to transform large stores and buck that trend, but if any retailer can do it John Lewis can. Its MD Andy Street wasn't Britain’s Most Admired Leader last year for nothing.