Five profit warnings in 20 months doesn’t do much to keep your shareholders quiet – not even if your name is Rolls-Royce, as CEO Warren East is discovering. In an effort to calm the increasingly strident calls for action, East will today outline his plans to get the troubled aero-engine giant out of the turbulence it currently finds itself in and climbing back up in the wide blue yonder once again.

East’s masterplan is expected to involve plenty of cost-cutting and a major management reshuffle (no doubt involving more job losses on top of the 3,000 or so already announced), with savings in the order of £150-£200m accruing from 2017. There has also been talk of a ‘focussed power systems portfolio’ which could be a hint that some underperforming assets will be hitting the market soon – most likely RR’s marine power business which has been badly hit by the falling oil price.

Will all this be enough to calm the fears of RR’s shareholders? Especially activist investor ValueAct (best known for its part in persuading Steve Ballmer that the time had come for him to step down as Microsoft’s boss back in 2014). The Californian hedge fund upped its stake in RR last week to 10% making it by far the firm’s largest single investor (an RR share price that has halved in the last year making this sort of stake-building much more affordable of course), and has called for a seat on the board, too. 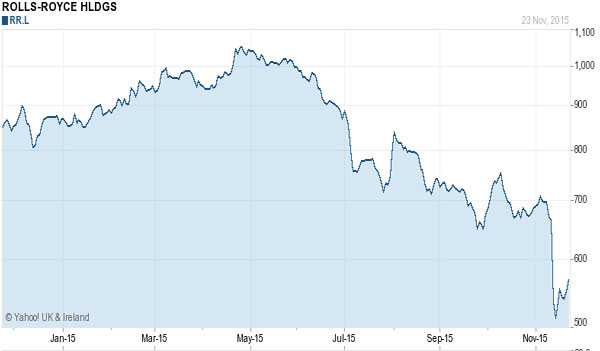 ValueAct's request has been turned down but East must be left in no doubt that the clock is ticking. ValueAct ‘s wishes may not be so very different from those of East himself, and its softly-softly approach less hostile than the traditional activist approach, but it surely means business all the same.

On the one hand this is fair enough – given its market position, RR’s financial performance has been pretty woeful of late. It is not unreasonable for any shareholder to request changes in the way that a company is run when its profits halve in less than two years. Nor to examine potential strategic blunders such as getting out of the market for narrow-body jet engines just as demand was about to pick up.

On the other, things at RR are not as bad as they have been painted. It is still going to make £1bn in profit and its order book is bulging with no less than £76bn of forward business. That is the kind of security that only high-value, hard to replicate, IP-and-expertise-laden manufacturing business can supply.

It’s also worth remembering that the seeds of these issues were laid by East’s predecessors, John Rishton and John Rose, and that East – who has only been on board since July – was hired specifically to do something about RR’s high costs and sclerotic management.

So, the firm’s problems are well known and the solutions readily apparent. it’s a question of execution more than of strategy.

And when it comes to executing the turnaround, cutting costs and streamlining the management of a complex RnD heavy engineering business without killing the goose that lays the goden egg, a real engineer (and the former CEO of one of the UK’s best-performing IP businesses, ARM, to boot) seems like a better bet than the financial engineers at a Silicon Valley hedge fund – however well ‘aligned’ they may be.