Tarek, a self-employed furniture designer, opens the door, introduces himself and welcomes me in to my workplace for the day. He makes me a coffee in his kitchen, then sits me down at a desk in his living room, in a chair that he designed himself. From my desk, I can see Les Invalides which houses Napoleon's tomb. And just peaking above the apartments opposite is the Eiffel Tower.

For €20, I'm spending the day in Tarek's Parisian flat, in the new world of work. While companies like WeWork are popularising the concept of co-working in shared spaces, companies like OfficeRiders are going a step further into the sharing economy - it's an Airbnb for workspaces, where homeowners like Tarek rent out their underutilised rooms to entrepreneurs, freelancers, start-ups, or people on business trips, like me, who'd prefer not to work in a Starbucks.

'If you are sharing the space, it's a good way to connect with other people,' explains OfficeRiders CEO Florian Delifer on a Skype call, using Tarek's Wi-Fi. 'In future, on our platform you'll also be able to spot not just the right workspace, but also the right people to work with and collaborate.'

Note the word 'workspace' where once we said 'office' or even 'workplace'. It's a nod to the reality that work can happen anywhere. Just as our workspaces are becoming more individual, so too is the nature of the work we do, when we do it and how we do it, as we enter a future of greater choice, decision-making and individual responsibility for the consequences.

Small – and agile – is beautiful

Already, 58% of all jobs growth across the EU between 2002 and 2010 is accounted for by small or micro enterprises with fewer than 10 employees.

According to several surveys, more than half of young people say they expect eventually to work independently or in small enterprises, and as many as two out of three declare an intention to leave their organisation by 2020 (The Deloitte Millennial Survey 2016). Their career expectations are mobile – not a job for life, but the hope for a life of jobs.

How should large corporates respond? Some are creating more agile business models - more cross-functional teams, more matrixed working. 'There's movement away from traditional corporate hierarchies, and rapid access to specialist skills on an as-needed basis, creating more job movement and even jobs becoming more like time-based roles,' explains CIPD chief executive Peter Cheese. 'There has been significant growth in flexi-working and irregular hours working, partly driven by individual choice but also by the growing demands of our 24/7 consumer-driven economies.'

The 'democratisation' of the workplace has been an emergent theme for some time, weakening the structures of command and control, and driving more collaborative learning and growth. At the extreme have been the much-cited examples – Zappos.com, WL Gore, Morning Star – of 'holacracies' or 'bossless' environments where employees decide how and what tasks and projects to work on, within transparent rules and guidelines. 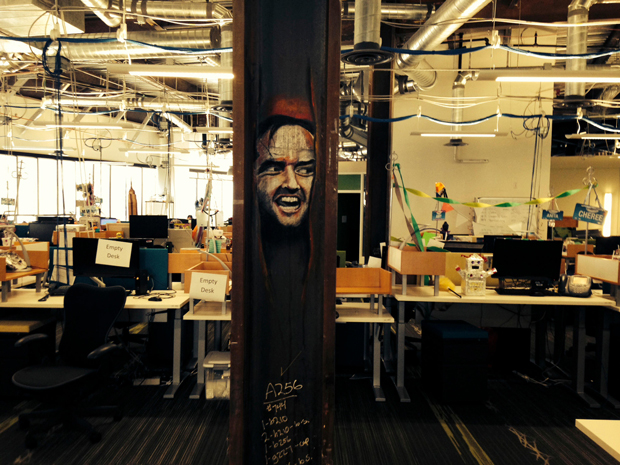 Zappos.com call centre in Las Vegas: you can book a tour to experience its bossless culture as well as its workplace artwork

The workplaces of the future are likely to encourage their employees to think and act like entrepreneurs within the confines of the organisation, free to take full ownership of particular domains or projects, with minimal supervision or bureaucracy.

This kind of 'intrapreneurship' is likely to be encouraged at every level, not just in the management or creative roles. Online shoe shop Zappos.com, for example, has abolished scripts in its call centres and given customer service staff the freedom to deal with complaints however they see fit.

The Future Workplace, a recent report commissioned by financial protection specialist Unum and written by The Future Laboratory, concluded that to attract and retain high-calibre employees, employers will need to foster a more collaborative environment – hot-desking, ideas workshops and regularly switching teams.

A 2015 McKinsey Global Institute report also suggested that as much as $12tn could be added to the global economy by 2025 by advancing women's equality in the workplace. Managing retirement rates, attracting and retaining young people, and doing a better job of diversity and inclusion will become increasingly important priorities.

Most estimates put the proportion of freelance workers at between 15 and 30% of the workforce already, and predict these forms of working could account for 40% or more of the workforce in the future.

There has been much excitement about the so-called 'gig economy' and new business models exemplified by the likes of Uber that run on the 'human cloud' – a vast global pool of freelancers available to work on demand from remote locations on any number of digital tasks.

Online platforms, such as Topcoder, Upwork or Amazon Mechanical Turk, match employers with freelancers, inviting them to bid for each task, which might be tagging photos, or writing code. McKinsey predicts that by 2025 some 540 million workers will have used one of these platforms to find work.

Champions of this crowdsourcing model claim it as a powerful force for the redistribution of wealth, bringing a fresh stream of income and flexible work into emerging economies such as India and the Philippines.

Critics say it's a 'race to the bottom', with workers in Mumbai or Manila able to undercut their peers in Geneva or London thanks to their lower living costs. Economist Guy Standing warns of creating a 'precariat' of workers with no financial security, job stability or prospect of career progression. And it's not just unskilled labour that will migrate to these platforms, says Standing. The knowledge economy is subject to the same forces of routinisation, division of labour and contracting out as the industrial and service economies.

There is already a precedent. In 2008, Pfizer realised that its most highly skilled employees were spending up to 40% of their time on routine tasks, entering data, producing PowerPoint slides and doing research on the web. The company now contracts out much of this work. But this on-demand economy will also present challenges for employers seeking to create consistent cultures, and for managers needing to connect and engage with their teams.

'Ultimately, this should be about creating greater choice in where and how we work - about the individualisation of work, balanced with the needs of organisations and productive output,' says CIPD's Cheese. 'But there is much need for adaptation of our processes, practices, laws, organisational systems, welfare and support systems, and what we measure and account for if we are to meet these trends.'

The 'office', the 'job', the 'salary', the subsidised canteen and the final-salary pension all belong to a previous century. That is both liberating and frightening. Management thinker Charles Handy – who popularised the phrase 'portfolio career' – advised his children to look for customers, not bosses. The on-demand, sharing economy is more likely to be a happier experience for those who value flexibility rather than stability – but all of us must get used to fending for ourselves. 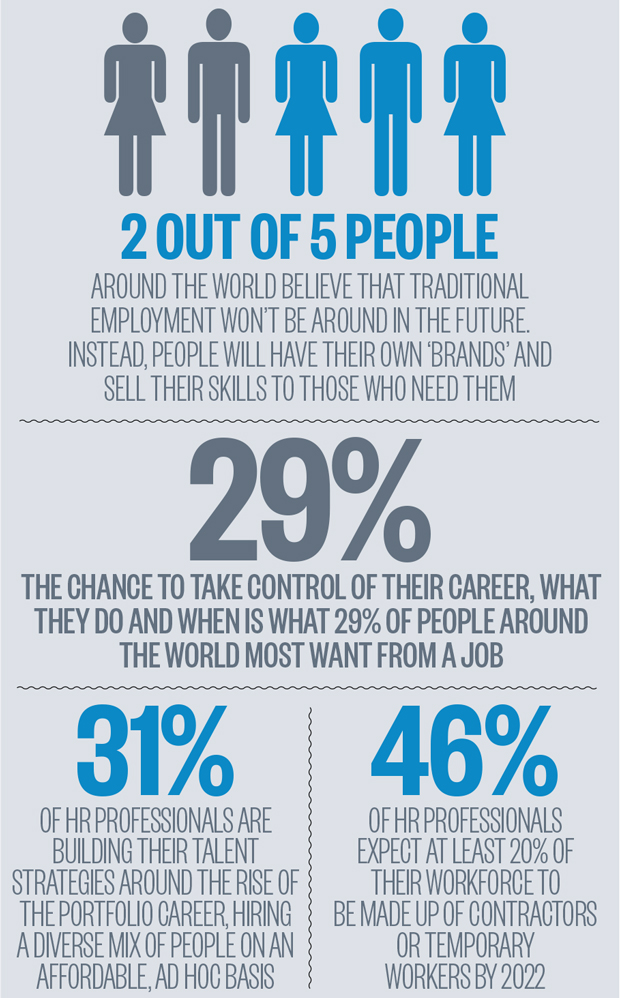 If flatter structures mean an end to the traditional promotion-based career ladder, what's the alternative?

At LinkedIn, employees are offered a 'tour of duty' in a role or on a project. When the tour is over, both sides can agree to renew it or end the agreement, in which case the company helps the employee find another job.

Genentech has a Career Lab that helps employees articulate and communicate their value so they can be more competitive for internal positions - and more employable for external ones.

1. Design careers around experiences not positions.

3. Push opportunities to employees instead of just pulling them into new positions.

4. Create a talent brokerage rather than just setting expectations for managers to share talent.

What will the world of work and corporate training look like in the next five years? Check out the video below for a glimpse into the future.