The uphill struggle to actually become a billionaire might be trumped by the difficulty in hanging onto your wealth once you've made it.

Despite the fact the past 35 years have borne a period of significant wealth creation by billionaires – a UBS/PwC 2015 report found that 917 self-made billionaires have created fortunes of more than $3.6trn during this time – these individuals are having a tough time hanging onto that status. Poor things.

Looking back 20 years, UBS and PWC surveyed 1,300 people in the 14 markets that account for 75% of global billionaire wealth and compiled a database on the world’s billionaire population. A follow-up report has revealed that it's not all bad news, as female billionaires are growing faster than the number of their male counterparts.

Don't go jumping the gun though – the number has grown by 6.6 times, from 22 in 1995 to 195 today, but the number of male billionaires remains significantly higher at 1,202 (a fivefold increase). The ratio of women to men in this group hasn’t changed much since 2005 – female billionaires have gained just one percentage point over the past decade to account for 11% of total billionaires’ wealth. 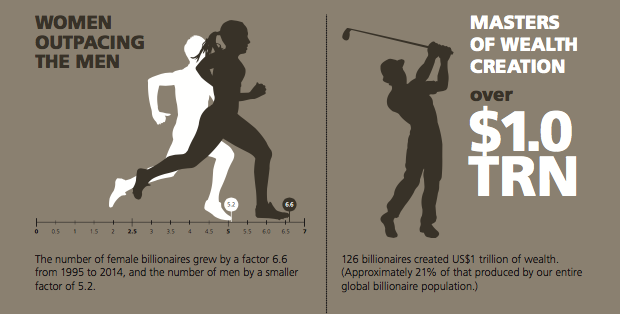 Perhaps more interesting in the latest report was that while most women had inherited their wealth (93% in Europe and 81% in the US), they are more likely than male billionaires to utilise this opportunity to create further wealth. Over two thirds of the women in the study were 'active value creators' – driving wealth creation whether as an entrepreneur or in the family business and through philanthropy. Which may mean they’ll be at the forefront of maintaining this status for future years. Only 44% of 1995’s class of billionaires remained in the billionaire bracket for 2014 and represented less than 10% of the 1,347 who made the cut.

So what accounts for the volatility of the numbers? There’s the rather obvious matter of death as one reason – 66 of 1995’s billionaires have passed away, while business problems and the slightly more vague ‘other reasons’ were cited as the cause for demotion of 73 others. Maybe they were watching Brewster's Millions and accepted the challenge to spend it all... Family dilution has also been at play, with 24 billionaires losing their title because of it.

Which makes the finding that women inheriting businesses were more likely than male counterparts to ‘take the initiative’, often driving expansion, even more interesting. The period of impressive wealth generation may soon decelerate – the report points out that the conditions in which billionaires thrive are cyclical and rising taxes, asset price deflation and rising inequality could slow the current cycle. But, with the gradual rise of female billionaires and their role in maintaining and developing wealth creation, so too might their ability to sustain legacies develop – a frequent trouble for billionaires.

A notable stat from the report was that more than 50% of Asian female billionaires are self-made – compared to 19% in the US and 7% in Europe. Over 95% of Asian female billionaires identify as wealth creators within the family and around half are first-generation entrepreneurs. If that trend continues, we could see such women at the helm of wealth preservation for multiple generations.