Brick by brick, from theme parks to films, Lego has built up the world’s most powerful brand. That’s according to consultancy Brand Finance anyway, which says the yellow figures have overtaken Ferrari’s fast cars in the love and loyalty stakes.

‘Children love the ability to construct their own worlds that it provides,’ Brand Finance said in its Global 500 report. ‘In a tech-saturated world, parents approve of the back-to-basics creativity it encourages and have a lingering nostalgia for the brand long after their own childhoods.’

Meanwhile, Ferrari’s fading success on the track has started to take its toll, according to the research, which analysed how much had been invested in a brand, its goodwill among customers, staff and others, and how much those had filtered through to the bottom line. ‘The sheen of glory from its 1990s golden era is beginning to wear thin,’ it said.

But even Lego has no patch on the financial heft of Apple and its legions of fanboys. Based on likely future sales and how much royalties someone would have to pay to use it, the Cupertino consumer electronics giant’s brand is worth a staggering $128bn (£83bn). After the hugely successful iPhone 6 launch, that’s 23% higher than last year and almost 60% more valuable than its nearest and bitterest rival, Samsung.

The highest-ranking British brand was Vodafone in 22nd place, with a value of $27.3bn, a drop of 8% and six places from 2014. HSBC was just behind it at number 23, although after allegations its Swiss branch helped millionaires avoid tax that could well slide this year.

Tesco’s brand haemorrhaged the most of any British company this year, its value plunging 37% to $11.1bn. ‘What happened to Tesco is a clear indication of what the wrong business strategy will do to a brand,’ said Brand Finance’s Robert Haigh.

Read more: Tesco and the true cost of losing a good reputation

Here is the full list of the world’s top 50 most valuable brands: 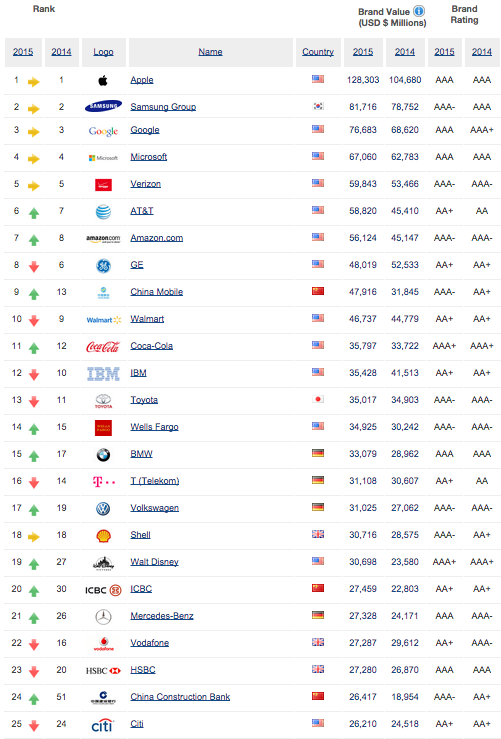 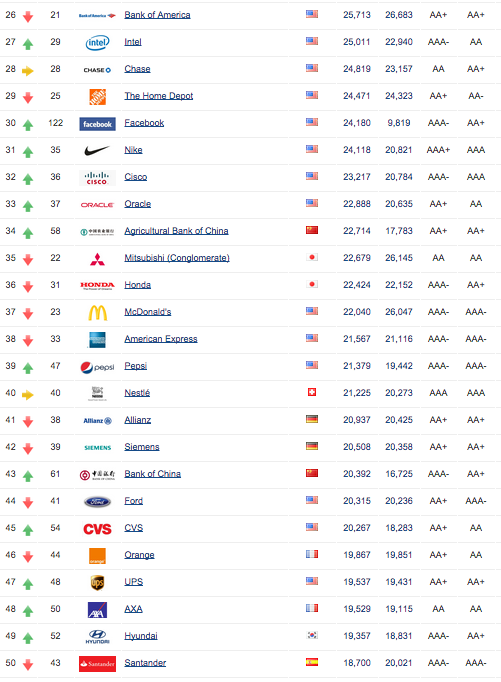