After Alibaba’s mammoth IPO last year, MT expects to see more Chinese ecommerce and tech firms hitting the headlines in 2015. And one of the most promising is smartphone maker Xiaomi, which was valued at $45bn (£29bn) after a $1.1bn funding round in December. This made it the world’s most valuable private technology firm, ahead of San Francisco taxi startup Uber.

This weekend it grabbed the media’s attention by announcing stunning levels of growth. Founded just over four years ago, it doubled revenues in 2014 to almost $12bn after selling 61 million phones last year. According to analysts IDC it sold 17 million units in the third quarter of 2014, making it world’s third largest smartphone maker after Samsung's 78 million and Apple's 39 million. 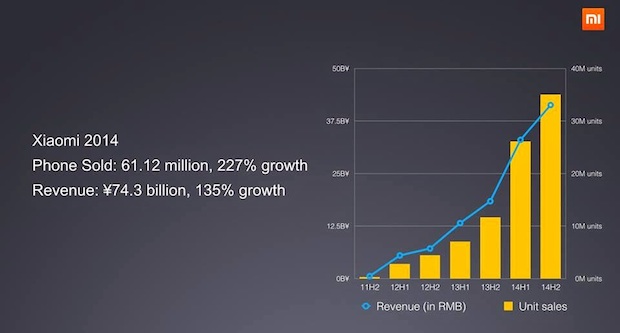 The business was created by eight partners including current CEO and chairman Jun Lei, a serial entrepreneur responsible for the software company Kingsoft and Joyo.com, an information and ecommerce site that later became Amazon’s Chinese branch. As well as Android smartphones its product range includes tablets (the Mi Pad), a smart TV and a HD set top box.

‘2014 is a year of important milestones for Xiaomi,’ Lei said when announcing these latest results. ‘We came from behind and became [the] market leader in China. We have faced, and will continue to face, more intense competition in the industry.’

This competition is likely to keep Xiaomi away from western markets for the time being, but the firm has done well in other Asian markets including India, where it sold 1 million handsets in its first six months.  It has also been rumoured to be mulling entry into Mexico, Russia, Brazil and Turkey. Watch out Samsung and Apple, there's a new player in town.