Zoe Williams is a Guardian columnist, Telegraph restaurant reviewer and author and has two children aged five and seven. Her husband is a geologist and they have a ‘sort of au pair ,but she doesn’t live with us’. Her new book is called ‘Get it together: why we deserve better politics’.

How does your family manage work and children?

It used to work really, really well. I’d do the school run and then work from home and be in - but not necessarily looking after them - when they got home from school. And I’d pick them up a few times a week and that was lovely.

But now I’ve written a book and, being an author, you have to be like a rag-and-bone man travelling the country to sell it to people, and it’s really embarrassing. You stand in a room with strangers in Bristol and, at the end, say ‘buy my book’. Mortifying.

Anyway, because of the book, I said ‘yes’ to going to loads of things and, of course, the children really hate me being away.

My plan now is to stop going out every night, because I know that the kids are going to remember it. I remember all the times my mother didn’t show up – like when she didn’t come to the maypole and I had to do a doubles dance on my own. And the time she was supposed to meet me in Sainsbury’s with her chequebook and I had to wander around with a trolley for an hour waiting for her. These memories are seared in me. Yet somehow I don’t remember all the times that she killed herself to be there. 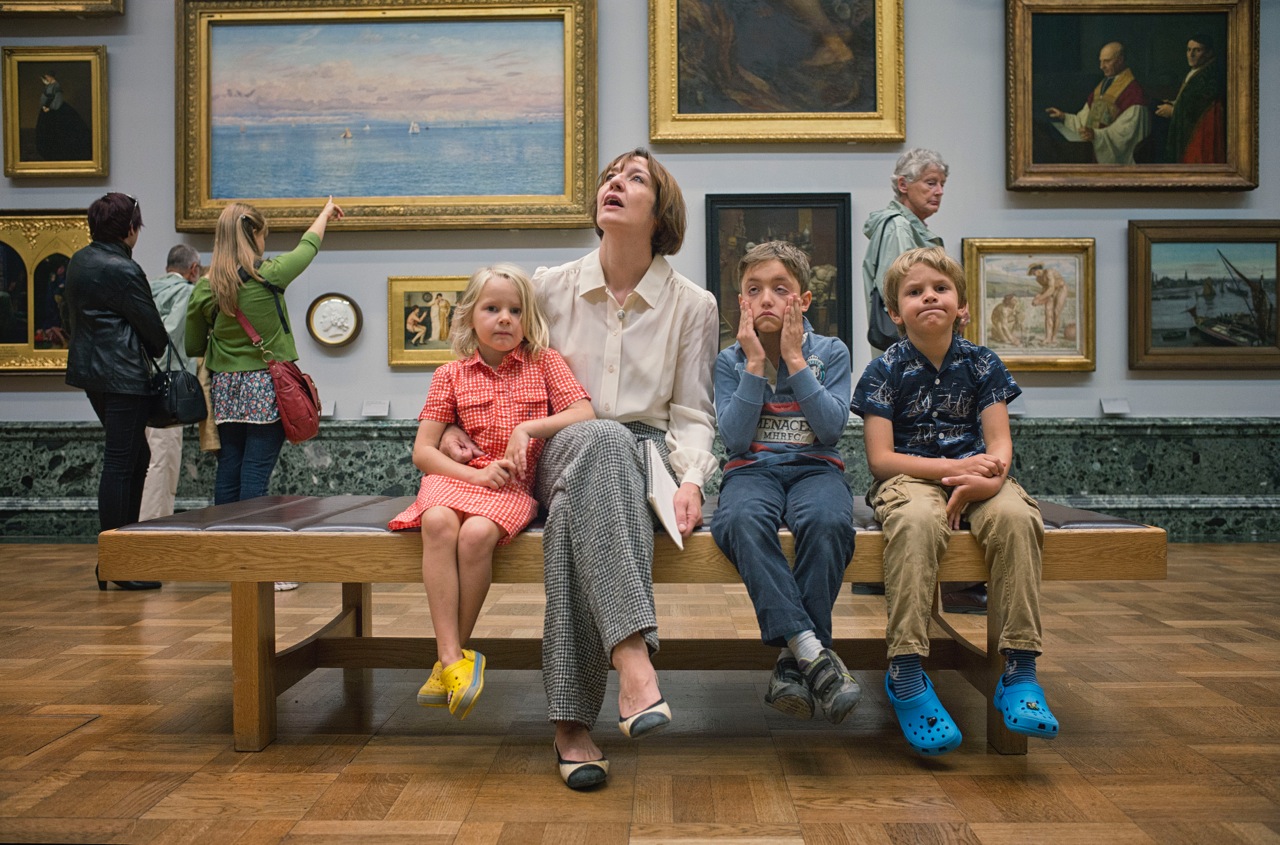 Williams with her two children and their friend (second from right).

I know it will be the same with my kids; they will remember that I wasn’t there. So, for my own peace of mind, I need to be able to yell at them when they are 25 that I was there every year… Well, aside from the front end of 2015.

What role does your husband play?

So he has this whole gender-bias analysis going on where, in his head, I do everything that I do for the kids just because I want to. For example, doing the school run because I like chatting to other mums. And I do like other mums, but that doesn’t mean it’s not important.

What do other mums think of you?

Oh, I think they think I’m nutty and say inappropriate things to my children. I try to explain political things in the wrong way and it all backfires. Like somehow giving them the impression that food banks are all Stalin’s fault. And then I try to row back. I’ll be talking about the environmental apocalypse and realise that I might be scaring them, like my own childhood fears of a nuclear bomb.

Actually I do slightly worry that I might be one of those cliquey-bitch mums. It hasn’t escaped my notice that my gang is the hard drinking crew and maybe we’re a bit ‘Mean Girls’…

Has having children changed you?

Yes. It’s increased my fear of death. I always used to think I was just on the precipice of making a huge error in work. I’d assume I was on the cusp of some terrible mistake that landed me in prison or made me obsolete. Before I had children, I used to think that if I died, although my mother would be upset, that people would think I did ok and at least I wasn’t fired.

Yes. I used to think, ‘what’s the worst that could happen?’ But now I have children, there are a trillion things that could happen that are just so unbearable. It’s like wearing your heart outside of your body and a gust of wind tears at you and it hurts.

Where do you work?

I mostly work from home, but I go into The Guardian about once a week.
I work in the British Library quite a lot too. If I go to the library I look for my own quotes rather than just re-circulating what is already out there on the internet. And it’s full of young gorgeous people snogging and I love that.

My main problem is Twitter and arguing with strangers for hours. I love it – but people yank my chain on Twitter and I can’t help but respond. Like I did a piece on senior women and part-time work and have been set up for promoting the needs of rich women. As if by being rich these women are trivial - which isn’t what people ever think of rich men.

What do your kids think of what you do?

I review cars and restaurants. So when we looked after someone else’s dog for a week my son said a bit disparagingly, ‘Are you reviewing dogs now mum?’

Is journalism a good job if you have kids?

The very worst job in journalism for mums is to be an arts editor because you have to go out every night and write it up every day. Honestly, it’s worse than being a war reporter – at least then you get periods at home between wars!

How do you organise your childcare?

So in The Guardian there was always this thing that if you said you had a nanny people’s hackles went up, as though you’d revealed yourself to be incredibly grand and over-privileged. It’s really absurd - they didn’t understand that a nanny is cheaper than two nursery places, which would break almost anyone.

When my son was six months old I decided that he shouldn’t have to hang out with anyone that I would be bored with. So we got this French nanny who looks like Betty Blue. It was like employing a film star, who just kindly looked after your kid between takes. She was quite flaky and tempestuous, but the least boring person and still a close friend. She made it work emotionally and practically.

But I am still conflicted about childcare and whether we’re exploiting other women. I agree with the Marxist analysis that if we don’t each do our own menial work then some women end up doing it all for everyone.  But then if I do it – that’ll be the end of my life outside the home...  I don’t know.

Did it change your career?

When I first had children they let me do a lot of writing about children and that really helped as I found my feet as a mother and was able to make money out of it. And then I realised that all other my work had evaporated.

I would have a column about raising the kids and then a news story about kids and then a feature on baby products. Mitchell and Webb wrote a book about Polyfilla columnists and they put me in as the classic ‘mum columnist’. I was so upset about it.

So you felt judged?

Yes. I noticed that society hates both mothers and people who aren’t mothers. As soon as you start writing about your children there is such vitriol.

I wrote a book about motherhood and I swear that more people complained about it than actually read it. They said I thought I was the first person to have a baby. But I’m not the first person to drive a car, cook asparagus or read Marx and I never get those comments when I write about those things.

Why do you get that reaction do you think?

I think it’s because, for a while, you’re really in love with your kids and you would stamp on everyone else’s head to ensure your child gets what it needs. People who understand that think it’s sweet and know you’ll come through it. But people who don’t understand it hate it. Before I had kids, when Rachel Cusk was doing all this, I found her annoying and I even wrote that.

Do you think people are jealous of mums with small kids?

I sort of do – it’s a conflict in us. I have friends at the school gates who have new babies and I’m really jealous of them, yet I am also so glad I don’t have to do that anymore.

Have your kids changed your politics?

Yes - my book is about politics and parenting has changed definitely my views. Parenting has changing my politics and made me angrier but less vitriolic. I am long-term, slow-burn angry about the direction and how to change it. The small point scoring victories don’t mean anything. I’m more mellow and forensic and faster and I don’t faff around.

I worry that we’ve forgotten how to have the arguments – like we all seem to accept the focus on productivity. But you can’t play a minuet in 30 seconds and make it better than it is in seven minutes, and you can’t care for an old lady better in 10 minutes than you did in half a day.

What do you think of the Women’s Equality Party?

I like Sandi [Toksvig] and the people involved, but I think they’re wrong. At some point you have to say, ‘I hold these principles and they are not gendered.’ The world is what creates the environment. There is no political agenda on earth that puts women front and centre and yet doesn’t also address the environment or tackle inequality more broadly. It doesn’t exist and it’s illogical not to strive for equality between all people.

What have you learnt from motherhood?

I’ve learnt that I rushed at everything too soon. I wrote my first column three days after my son was born. When he was six months I took him to Yarl’s Wood Immigration Centre, but the car was too hot and we had to turn back, and I still feel guilty about it. Those women needed a voice and I screwed it up. Everything is a phase and there is enough time.

Has your children changed your relationship with work?

I would choose the school play over interviewing Barack Obama, because you have to honour your promises to your children.

Do mothers have better judgement than non-mothers?

By Orianna Rosa Royle
14 hours ago
Women in Business